Mom has moved into exam mode. That means all she is doing is studying. No blog, no forums, nothing that isn't related to public administration. Exams are October 18-28.  Wish her luck!

In the meantime, enjoy this Peep diorama of potholes. See you at the end of October! 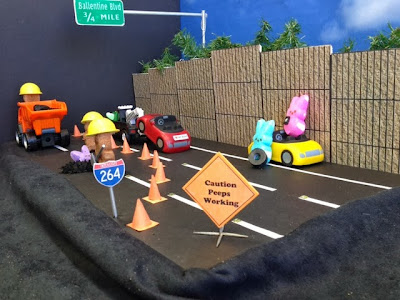 Posted by Southern Fried Pugs at 11:39 AM 8 comments

She's 40 today. Can you believe it? She's celebrating with cheesecake and a study meeting for her exams. It's a big one, but a real celebration is going to have to wait until the doctorate is done. Then we'll party. 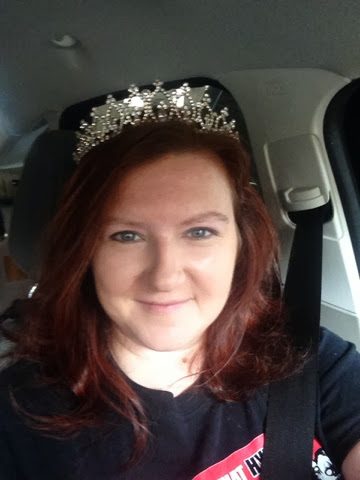 Everything's okay now. But earlier today, it was not.

Mom gives us a rib bone after we get our nails trimmed. She buys a rack of ribs that most people would barbecue and cuts in the meaty area between the bones. She freezes them then gives them to us frozen after nail grinding.

We were all gnawing happily on our bones, us in our crates and Isabelle on her bed. Mom stepped outside to check on the laundry. Then she heard us barking our heads off. If one of us loses our bone through the wires of the crate, we carry on. But it's usually just the one of us. A little voice in mom's head said that she should check.

When she came back in, Isabelle was laying on her side with the bone halfway down her throat, blocking her airway. Her tongue had turned completely gray, an indicator that she was getting no oxygen. She was twitching her legs, her eyes were open and her body was stiff.

Naturally, mom took the bone out right away. Isabelle's was mostly meat which is probably why it lodged in her throat so easily. It took a few horrifying seconds, but she started breathing on her own. Once mom saw that, she ran to get the oxygen tank.

Again, mom made a mistake. She kept the oxygen tank dismantled (there's three pieces to make it work) to make sure it didn't leak oxygen. We have gas for heating and cooking so mom was afraid that a leak would catch fire. She couldn't find the one piece that turned the oxygen on for 20 minutes.

By this point, Isabelle was up and walking around. Her tongue was no longer gray, and she could walk without stumbling. Despite that, mom gave her some oxygen anyway until her tongue was bright pink.

She's napping now. Oxygen makes her uber-relaxed then sleepy. Her throat is probably sore so mom gave her some honey to soothe it.
The lessons here? Never leave your dog with a bone. Mom knows better, but she did it anyway. She won't do it again. And if you have something like oxygen or an epi-pen or some other life saving thing, for pug's sake, make sure it's available to use. If Isabelle's life depended on that oxygen, she wouldn't have made it. Now, the tank is all put together except the key that turns on the oxygen. It is tied with a ribbon to the tank so it won't get lost again.

Mom always wondered if we would alert her that something was happening. This time at least, we did. Mom likes to think that we were calling for help, but she figures that in reality, we weren't. We aren't exactly known for being helpful where Isabelle is concerned. No matter the reason, at least we did make a big enough of a fuss that Isabelle was saved.

So learn from mom's mistakes. Never leave your dog unattended with a bone or chew that can be swallowed. Keep your emergency stuff ready. And hug your guys a little tighter tonight.

Things have been kind of rough around here. Mom's been depressed which means she doesn't want to do anything fun anymore. We haven't been helping either. We've been really rotten and mean. Probably acting out because we aren't getting the doting attention we used to. Anyway.

Hopefully, that is changing. Mom's started a new blog. This new one is a lot less pugcentric and lot less cheery. But it's how she's feeling right now and that's okay.

In the meantime, she got some training DVDs and a book from Patricia McConnell to whip us back in shape. The DVDs are Dog-Dog Aggression (told you we were mean) and Feeling Outnumbered (this book too). Mom is hoping to learn some positive ways to retrain us to behave like good pugs. Or at the very least, not horrible, hateful little dogs.

*Mom here* I fully admit and take responsibility for their bad behavior. I spoiled them in the worst way. I turned them into entitled, frustrated dogs. So I have to do what I can to fix it. We'll keep you updated on the progress. *Back to the pugs*

Summer really didn't turn out like we planned. The garden didn't produce hardly anything but a few tomatoes, and we ate most of them green. August was really chilly for us so very little swimming. Early Late July/August was pretty neat because Mom officially became an aunt. Our aunt adopted one of her foster daughters, making M a permanent member of the family. Her foster kids are always family, just not always permanent. M is a senior in high school this year. Just like with dogs, the older ones rarely get adopted. We are so proud of our aunt for opening her heart to many children who need a safe and loving home. Biology doesn't make a family, love does. If you think being a rescue dog foster is hard, imagine it with kids. Mom says she'll stick with pugs though.

Anyway, Aunt Mandy came to visit with her three girls. It was a whirlwind four days. They went to the Outer Banks, a water park, Washington DC and Virginia Beach.
They went and went and went. They took a boat ride, saw dolphins, swam in the ocean, rode a ferry. Walked for hours in DC, seeing the monuments at the National Mall and one floor of the Smithsonian Museum of Natural History. They went to the Holocaust Museum. It was very sad.

It was four days packed with adventure. We sat home. Didn't even get a t-shirt.

Now it's September. Mom has started the very intense process of studying for her doctoral exams in October. What does that mean for us? Well, no Pugoween this year. Or costumes. Maybe a pug meet up, but none since June. She really has to study hard for these exams. On the bright side, it means a lot of sitting on the couch for her which equals snuggle time for us. She's going to try to walk us once a week and work on our training 10-15 minutes each day, but very little extra stuff. We'll do our best to make her blog for us. And she'll blog on her other one too.

Thanks for sticking with us. Once this doctoral thing is done, surely life will be better, right?
Posted by Southern Fried Pugs at 10:55 PM 4 comments