Mom needs some good juju, positive thoughts or prayers sent her way.
Tomorrow is her last written exam for her doctorate.
She didn't do so well last time, and this is her last chance.
She feels ready, but there's the anxiety from failing before on top of normal anxiety about a test.

So we are cuddling her tonight. But please think good thoughts for a good night's sleep tonight and calm nerves tomorrow from 8:30 to 1:30.

After successfully passing this exam, she still has an oral exam. Then it's on to the dissertation! Paws crossed, she will graduate in May 2016.

Once this exam is over, we have to share with you the incredible gift we received.
Posted by Southern Fried Pugs at 7:23 PM 9 comments

Back in September, we got car seats. They replace the ones mom made that were comfy but not especially safe. These are the safest ones on the market as of now. They are even crash tested! 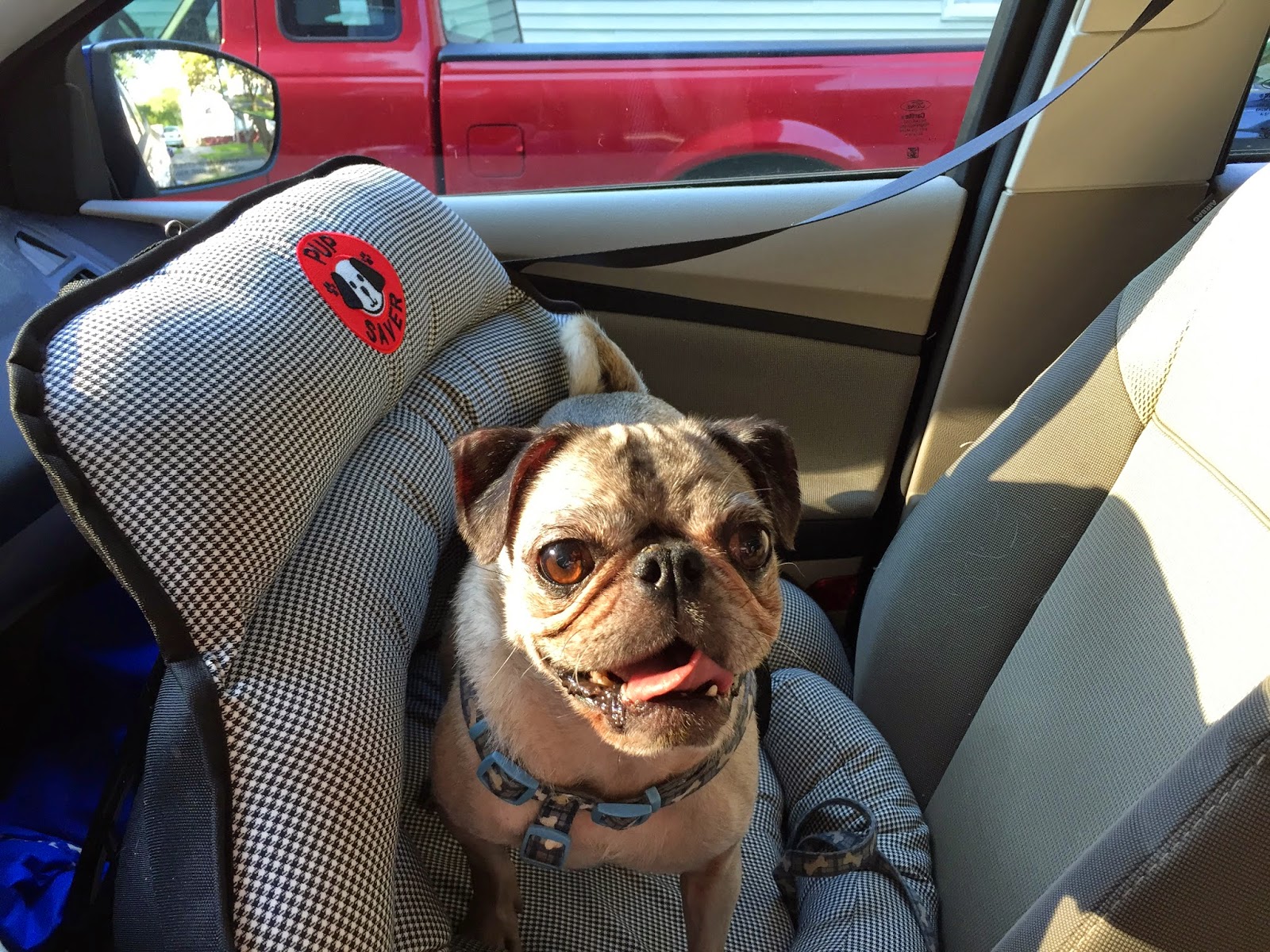 The way they work in a collision is that they catch the dog like a catcher's mitt. You can't really see , but there's a strap in the middle of the seat that you attach to a harness or a collar. You use the shoulder seat belt to keep the seat in place. 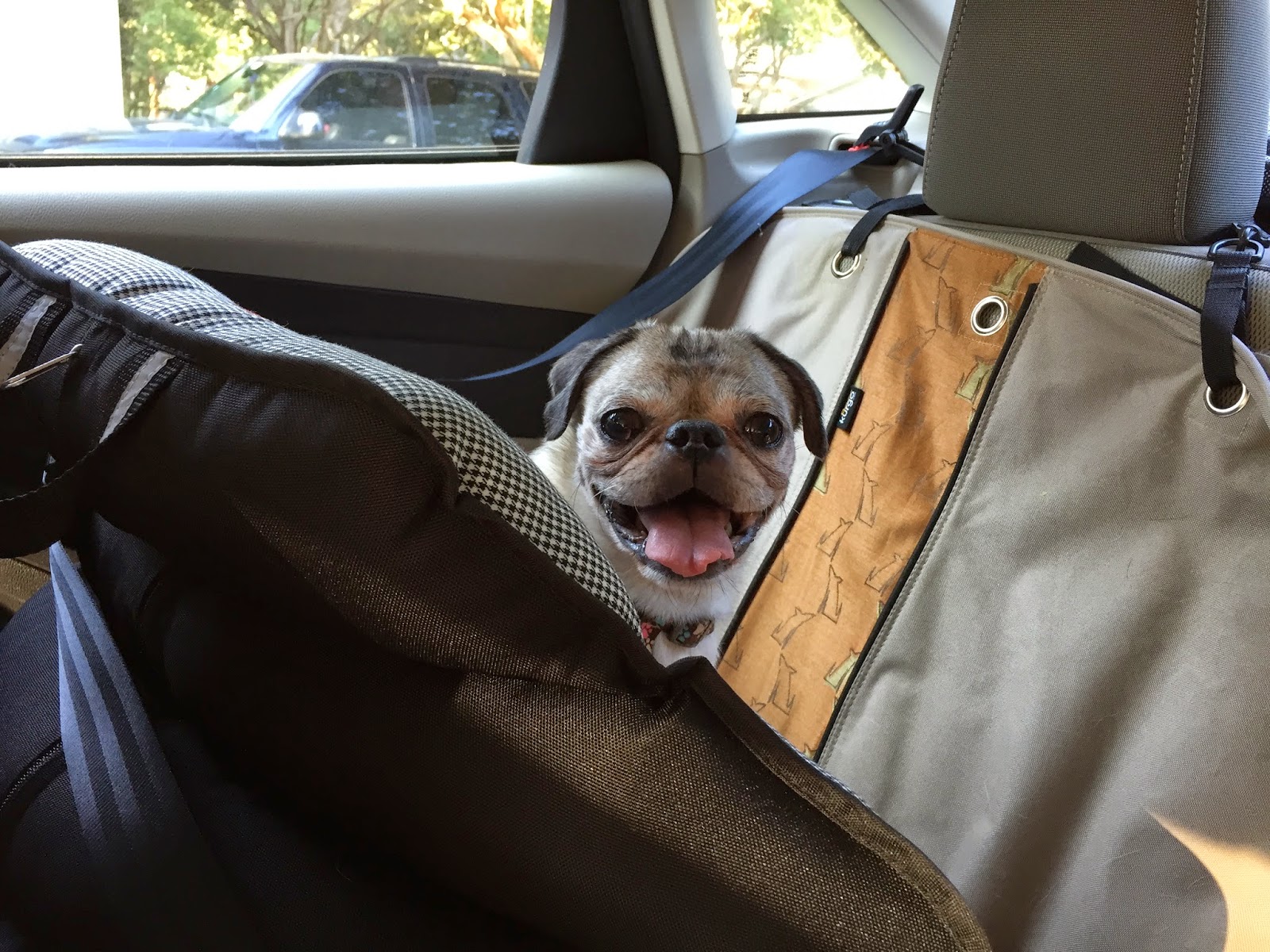 Petunia is not a big fan of her seat. However, she wasn't a fan of her other one either. She wants to be in the front seat with Tallulah. But she stays in unless she wiggles out of her harness.

As of now, they still only make them for the right side of a car. We are hoping that they will make a modification to alter the seat belt straps so that you can use them on the left side of the car, too.

We hope to never need them, but just in case, we are better protected.

Now, when you click on the link for prices, you will probably choke a little. Mom sure did. Man, stuff is expensive! But if you do some serious hunting, you can find better prices. We got ours through QVC for much less. It doesn't look like they are available any longer though.

These will work great for bigger cars than our little Ford Focus. The front seat one sticks out over the cup holder somewhat. A hard cup like a Thermos-y type works fine. The paper cups from fast food places have been a little of a problem, but nothing too terrible.

They are not machine washable, only spot cleaning. Which means no eating in the car for us. So far, mom's been able to vacuum up crumbs and popcorn kernels easily.

Mom keeps them in place, but they are medium difficult to install/reinstall. Probably, the more you do it, the easier it would be.

If you have any questions for us, leave them in the comments!

A little clarification from the comments.
The Center for Pet Safety is a non-profit organization that tests pet products specifically for safety. This organization has crash tested harnesses that are sold as pet restraints for traveling. Those are some scary results as seen in our reply to Lolapug. CPS did not perform the test for the Pupsaver. In fact, on Twitter, CPS stated that they do not recommend any product that connects to a dog's harness.

The Pupsaver crash test was done by the MGA Research Corporation. This is a private company that does testing. They are a third party company that is often used by the National Highway Traffic Safety Administration, a federal organization.  However, CPS used the same laboratory (MGA) for testing harnesses, too. So in reply to the comment below, I (the human) am comfortable knowing that the same lab tested the harnesses and the Pupsaver. The harnesses (with the exception of Sleepypod Clickit) failed and that the Pupsaver passed.

Remember that there are two different things going on here. One is the testing of harnesses that claim to be travel restraints. For example, we had some that clicked into the seat belt snap. You can google dog seat belt harness and see what we are talking about. Those harnesses are the ones that the CPS tested. They did not test any car seats. They do not claim to test car seats.

I think the confusion comes from incorrect reporting by some blogs, news outlets and pet product companies. I've seen references to the CPS in the same story as Pupsaver, leading people to think that the CPS did the testing. As far as I can tell, Pupsaver has never claimed that. And in this highly litigious world, CPS would sue Pupsaver if they had claimed it.

Is it perfect? Probably not. It has not been tested in roll over accidents. But then again, roll over accidents make up a small percentage of the overall accidents each year. The clamshell feature will pull the top part down over the dog as the seat belt tightens which will help protect the dog from flying glass somewhat. At this point, I (the human) feel like this is the safest thing for my particular dogs. If I had dogs other than pugs, I would consider the Sleepypod Clickit for them. However, having lived with a pug with a collapsing trachea, I want to do everything I can to prevent any damage to the trachea. Even walking harnesses can damage a pug's trachea so that's why I am avoiding those. The harnesses my pugs do wear are low on the chest. And in the Pupsaver, they will not reach the length of the strap and be jerked back in an accident.

Every dog parent has to do their own homework and do what they can when it comes to pet safety. I did do my homework on this, and I am confident that I know what I bought. I bought the best possible option for my dogs. Not necessarily yours. Will it save their lives in a serious crash? Possibly not. But then again, my airbags may not save mine either if it's a bad enough crash.