Isabelle at the keys today. Like my friend Sid, I like to time my health issues to coincide with the holidays. Makes the holiday so much more festive.
Anyway, I started having problems with my breathing Saturday night. Wheezing, panting, snotty nose, the usual. Mom pulled out all her tricks to help from the inhalers (2 different kind of meds) to chest rubs to break up congestion to making me stay inside most of the weekend with the air on frigid.
I would improve then get worse. Lather, rinse, repeat. Just when mom would get ready to take me to the ER vet, I would get better.
Well this morning, she took me to my regular vet to figure out what was going on. She was sure I was on my way to pneumonia. Ha ha, joke's on her! After oxygen (loved that!) and an xray, no congestion in my lungs at all! I do have a small tracheal infection but a round of antibiotics and steroids should get me back to normal. The vet even said that my lungs looked better now than a year ago! Hee hee!
Since I really enjoyed the hit of oxygen before the xray, mom and the vet are looking into getting me my own tank. We'll hook it up to my stroller so I can get to bingo with the girls!
So remember kids, save your illnesses and injuries for the holidays when you can. Don't let that barbecue or big dinner steal the spotlight from you! 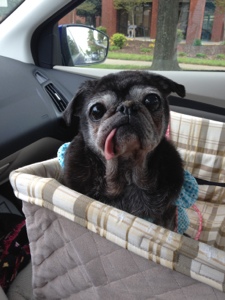 Has everyone already switched over yet? Mom has been holding out until she could play with it more, but apparently her time is running out.
Anyway, she found the stats page. Have any of you ever checked out your stats? Do they baffle you? 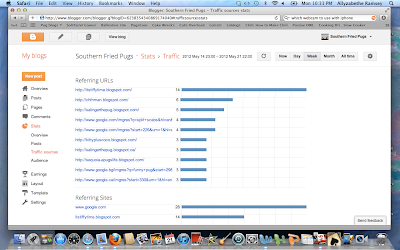 Like the fact that Tiffy's blog has sent us the most traffic. We surely appreciate it, but it still baffles us. 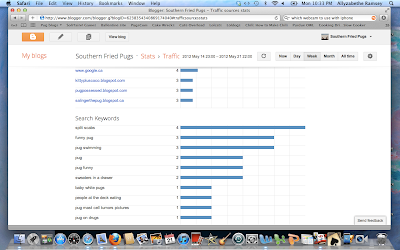 Or these stats that show the keywords that lead to our blog. Hmmm, split scabs. Grody!

What are the odd things that Google is telling you about your blog?


Mom didn't get many pictures, but other people did. So when those come in, we will be sure to share.
Posted by Southern Fried Pugs at 10:54 AM 8 comments

Holy pug, mom has been busy!
Pugapalooza is Saturday, and as usual, she's got a million things to do by then. Our theme this year is the Puglympics! Winners of the contests get medals (which mom had to alter to fit pugs). This is our fourth year raising money for pug rescue!
How cute is our logo this year? 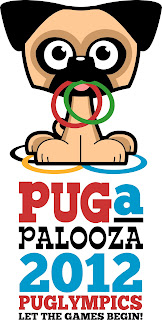 Awesome pug people, the de Borde family (Rob, Sue and Chloe) of Boodapug created this for us. They are selling t shirts with the logo with a portion of the proceeds going to Pugs U Gotta Save to help needy pugs like Oliver! Feel free to order an awesome shirt for your humans or yourself!
Speaking of Oliver, he was neutered today. He's a little loopy and will be sore, but he'll be just fine. He's been chewing on bully sticks since he got home. 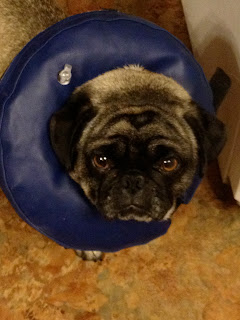 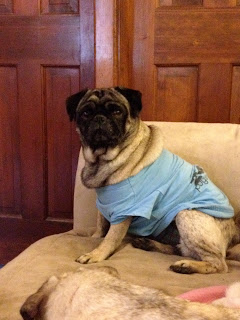 He has to be in a crate when mom's at work.
Some dogs really don't like crates, but we started by feeding him in there.
He seems to like it okay!
He's eating well and doing his best to avoid taking his Benadryl. Just an excuse to get a pill pocket, we think! The shirt is to help with the itchies that drive you crazy. Mom has a theory that wearing clothes is similar to wearing a Thundershirt, somehow calming and soothing. Plus, it beats wearing a cone to prevent chewing.
His partner in crime, Piper, was also rescued. She's at another home locally, because honestly, we don't need any more ladies in the house. And she might be pregnant. That is a super NO. Mom can handle cancer, old age, death, but no babies. They are cute and all, but the potential for an emergency C section, every 2 hour feedings and trying to keep the peace makes it out of the question. But Piper is in a first rate foster home with experience in pug babies.
Posted by Southern Fried Pugs at 8:15 PM 7 comments 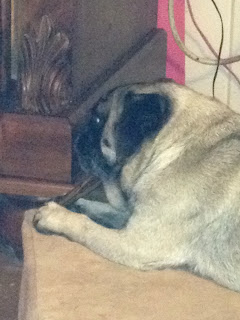 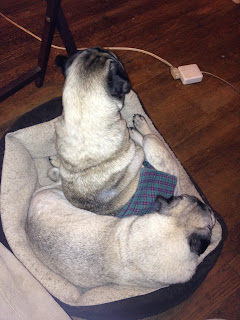 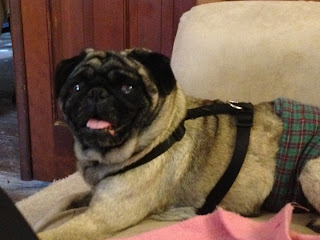 Mysterious doings at the dog park 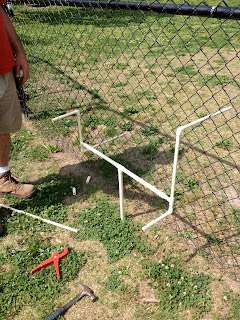 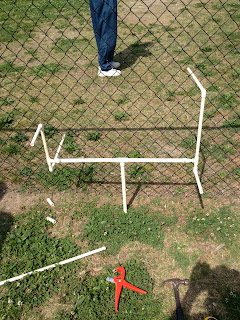 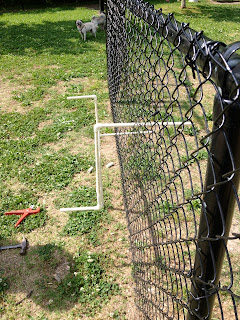 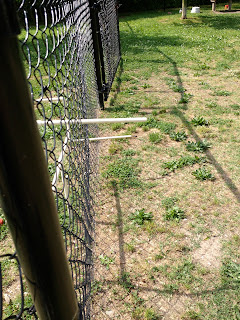 What the heck?
Posted by Southern Fried Pugs at 11:31 AM 3 comments

So local pugs, let us know if you want to meet up! We've already heard from Wilma and her mom. Can't wait to meet Wilma, Brigitte and Sluggo plus their peeps!