Apparently, we can only blog once every six months. Here's a picture of a merpug to apologize. 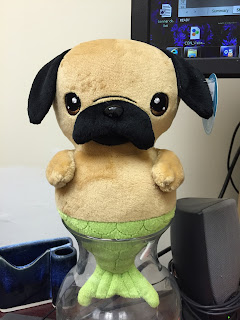 Look, life hasn't been going so great for mom. We pugs are okay. Well, Tallulah has had some med changes, but overall, we're fine.

This is supposed to be a fun pug blog, and we don't want to bring everybody down. However, we do want to explain our absence some.

The last 18 months has been really hard.
We lost two kitty siblings in the same weekend. It was traumatic, and our remaining kitty has had a hard time adjusting to being the only one.
Mom is not in her PhD program any more. She failed her exam. Six years and sooooo much money gone. This shook the foundation of her being and made her question her life. Completely changed the course of what she thought the future was supposed to be. When your whole life was based on an assumption and that assumption turns out to be wrong, what are you left with?
In February, mom's shoulder and neck really started hurting. She gets care from the VA (disabled veteran) for some things. After months and months of waiting (and finally a threat to go to the media), mom finally got an appointment with an orthopedic doctor. Last week. There's a strong possibility that she has a torn rotator cuff and will need surgery. So that's been fun.
Since June 2015, she's been doing her own job and another person's job. That person retired. Then she got a third person's responsibilities in January 2016. She was promised a raise and someone to help with all this work in February. In June of this year, she found out that was a lie. Then the person who promised the raise tried to get her fired. She still has her job, but it was scary.
With all this work turmoil, mom decided it was time to look for new work and move. That means taking a hard look at our house and fixing it up. We had our contractors and a realtor come through and give us an estimate on what it would cost to upgrade our 120 year old house to compete with the brand new houses in the neighborhood.
It would take $50,000. And the realtor said that even with those upgrades (and stripping out all of the character out), we wouldn't be able to sell the house for enough money to cover the cost of the renovation plus the mortgage. Our contractor and the realtor agreed that it would be better if we didn't do the renovation at all. Put some money into curb appeal, scrub the house top to bottom, clear it out and sell it as is. The new houses are new with open layout, blah blah blah. Our house is old. It has walls. It has original features and quirks. Thank pug for an honest contractor!
Hearing that was a relief, actually. Going through the house with the contractor made mom cry. The contractor recommended (against her own *personal* taste) that we paint all the woodwork white, that all the walls be painted beige, that the solid wood, handmade cabinets be painted too. When you sell your house, you are *supposed* to depersonalize and let go. It's one thing to paint your blue walls to a neutral color. It's another to paint real wood (not crappy plywood) cabinets, crown molding and doors.
So that's what we're doing. We had the front porch and back deck painted. A new storm door and the porch railings fixed. The house was pressure washed and the window frames were painted. Inside, mom has been going through stuff. She's made several trips to the dump, thrift stores and recycling center. She has even more to go. We have nearly 1900 square feet of house plus a shed crammed with stuff. Plus a bunch of outdoor stuff like patio furniture. The plan is to reduce the amount of stuff we have so we could move to a smaller apartment with a storage unit.
Oh, and mom's teeth are cracking from clenching her jaw. She's been to the dentist three times in a month. Got another appointment next week. They fix one abfraction and another pops up. She's gone through four over the counter mouth guards since January. She has to get a cavity filled then she'll get fitted for a professional one that will hopefully last longer.
That's pretty much the lowlights of the last year and a half. There have been other smaller dramas, but those are the biggies. It has not been fun.

BUT, here's what we're doing about it.
Mom is applying for jobs. Many jobs. In other states. There's one in particular that she really wants that starts reviewing applications after August 15.
When she gets home from work, she does about an hour of sorting of stuff (usually). She has a lot to go (hasn't even touched the shed or the holiday decoration boxes), but she is making some slow progress. Even with one working arm.
She had a MRI last week on her shoulder. Her appointment is August 11 to see if she needs surgery or not, but we're hoping she gets in earlier. If she needs surgery, our grandma will come stay for a while. Fortunately, mom does have lots of vacation time from work. The doctor thought if she needed surgery, it could be scheduled in two weeks. Rotator cuff surgery recovery seems to be about 6 weeks.
So while mom is home recovering from surgery, she can use that one good arm to sort through stuff. She may not be able to lift a box, but she can sort with one hand into keep, donate and trash piles. She  may be able to pack a little too. She can definitely paint a wall or trim with one arm, at least for a while.
When mom does get that new job and we do move, we'll be ready. We hope to be out of here by Christmas. Earlier if possible. But moving in the summer would be miserable. Moving after she recovers from surgery would make a lot more sense. October would be great.
If you pray, please pray that mom gets the right job for her. We have faith that God has a plan, and we want to follow the plan. It's not knowing the plan that makes mom nervous, but that's the point of faith, right? So maybe just pray for us in general.
We are going to try to blog more. No promises though because obviously we haven't kept them in the past. It's hard because mom is working 10-11 hours a day then coming home to work on the house. Then applying for jobs. But she'll try.
Also, if anyone wanted to visit us in Virginia, you should probably schedule it soon. Paws crossed, our guest bedroom will be full of boxes in a few months!
Posted by Southern Fried Pugs at 5:36 PM