Sunday, we had big plans to go into the big, bad city of New York. Manhattan and Washington Square Park, specifically. The Sunday 1000 Pugs! shoot was headquartered there, and we were going to meet up with more friends!

Unfortunately, mom woke up with one of those migraines that made her really sick to her stomach. So bad that if she took the medicine to help her headache, she would not be able to keep it down. She was dizzy and couldn't even stand up straight. She had some medicine to help with upset tummy but had never tried it. Even after taking it, she knew that she would not be able to drive into the city. That would take way too much concentration that she just didn't have.

But Wilma's mom to the rescue! A true pug hero, she offered to drive all of us into the city for the meet up then drive all the way back to the hotel. Now, they live an hour to the north of the city, and our hotel was an hour south of the city. So awesome woman that she is, she went two hours out of her way to make sure that we got to go. We absolutely <3 her! She completely saved the day. 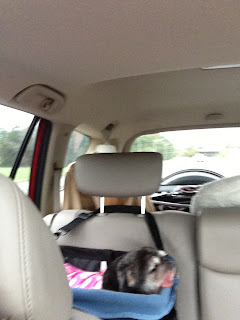 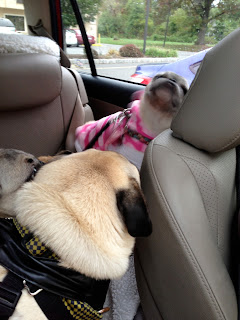 Believe it or not, there's five pugs back there.

It was cold and rainy in Manhattan, but so worth it because we got to see Tim and Christy again! And Scarlet's mom for a little bit. And a brief glimpse of Sid and his people. Plus, we got to see Marshmallow, Mochi and Macho and their people! They are adorable!


Pugs took over the small dog park, and it was just like yesterday. So many people stopped to take pictures of all of us! We are going to wind up on so many people's Facebook pages. The puparrazi attention has gone to our heads! 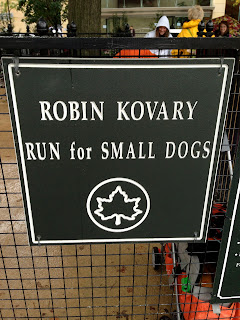 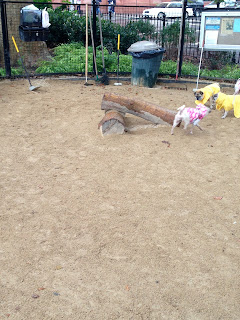 Waiting for treats! There's half of Petunia, Wilma, Sluggo and Brigitte.

We heard this was a fountain in the summer. The water was turned off to get ready for winter. 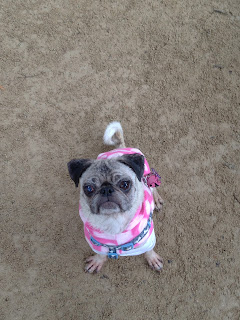 Tallulah now automatically poses when someone holds up a phone. 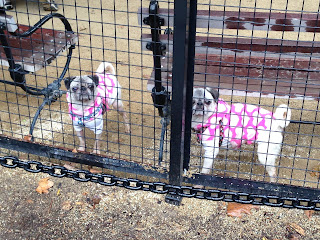 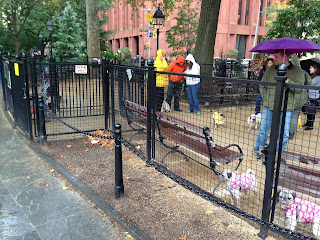 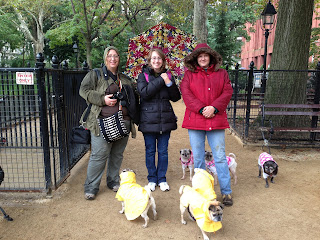 It's not a big park, but not too bad for little dogs like us.
It's Kathy, Christy and mom! And all six of us pugs. Mom's bundled in the coat because we are southerners. We don't do 70 degrees or less. 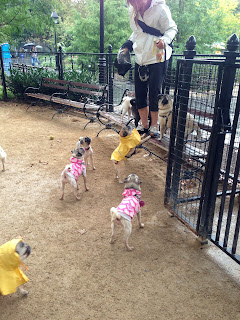 Look, it's Miss Amanda again! She had to jump on a bench to get away from the voracious pugs. Treats! 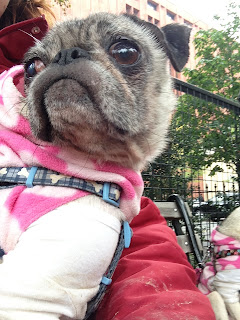 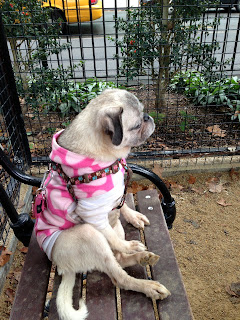 We're chilling on the park bench. 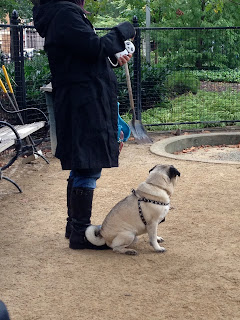 Puglet apparently has this thing about sitting on stuff. This time is was someone's foot!

We hung at the park for a few hours, getting super dirty and wet. Then it was time to go. Although the headache thing was a pain (literally), it worked out for the best. Mom never would have made it into and out of the city intact. The folks here drive on the offensive. We are southern and were raised to be polite, even when we don't want to be. Mom would never have lasted in the traffic to the tunnel. Again, a huge thanks to Wilma's mom for braving the city with six pugs. 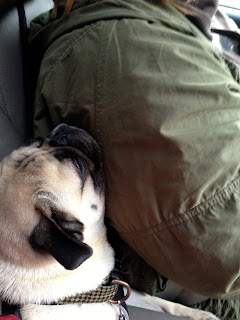 Sluggo, sleeping on his mom's arm.
Posted by Southern Fried Pugs at 10:23 AM